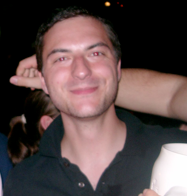 was born in a small Bavarian town called Weissenburg and thus grew up in a rural area. The next somewhat bigger city is Nuremberg, known world wide for its Nuremberger bratwurst, gingerbread and in particular the Christkindlesmarkt. In December 2010, I completed my MSc in Computer Science at the University of Erlangen-Nuremberg, Germany.

While I was working at the Institute of Pattern Recognition under the supervision of Joachim Hornegger and then doctoral student Dieter Hahn, I discovered my interest in medical imaging and (biomedical) image analysis.

During the final year of my MSc studies, I took a journey abroad to pursue a one year internship at Siemens Corporate Research in Princeton, NJ. Here I was working on the segmentation of liver vessels from CT angiography images and the separation of the portal and hepatic venous trees. A major contribution was the implementation of an efficient and fast vessel detector and a software interface for semi-manual editing of vessel trees for ground truth annotations. The experience of working and living in a foreign country has encouraged me to return to the United States after the completion of my studies.

For the two years after my MSc studies, I joined the Section of Biomedical Image Analysis (SBIA) at the University of Pennsylvania under supervision of Christos Davatzikos and Kilian Pohl. SBIA has since been united with other biomedical image analysis groups to form the Center for Biomedical Image Computing and Analysis (CBICA). In my position as Scientific Programmer I was responsible for the software infrastructure at the lab. I collaborated with the researchers in the final stages of their projects to improve the quality and maintainability of their software, and to distribute these as Open Source along with the necessary user manuals. Popular packages include GLISTR, DRAMMS, and GONDOLA. The definition of software development standards based on best practices tailored for a research environment and a common software packaging cumulated in the (CMake) BASIS meta-project, which I am still maintaining.

In October 2012, I moved back to Europe to continue my studies as PhD student in the Biomedical Image Analysis (BioMedIA) group at the Imperial College London under supervision of Daniel Rueckert. My research interests are focused around (medical) image registration, machine learning, computational anatomy, and brain atlas construction. I have made significant contributions to and improvements of the MIRTK software originally written by Daniel Rueckert and Julia Schnabel, with an effort to provide a flexible, fast, and state-of-the-art framework for image registration based on the free-form deformation (FFD) model, which is among the most successful in brain image registration for already more than the past decade. I have applied these new tools in a novel spatio-temporal brain atlas construction framework for the study of early brain development in fetuses and premature born neonates.